19 charts and six tables illustrate data and statistics of the tourism sector in Italy even in comparison with Europe and online performances of the most visited archaeological sites.

To summarize some numbers of the Report on foreign tourism in Italy, 2018 Edition, show that:

Specifically by downloading the document you can learn:

In 2017 has consolidated the growth trend in the number of foreign tourists who chose Italy for their holidays. According to the statistics of the Bank of Italy visitors from abroad were almost 91 million, an increase of about 5 million compared to 2016. Compared to 2011 the growth stood at 14 million.

The signs that the web offers, through your Google searches globally on Italy as a tourist destination, report that even in the first half of 2018 the trend was positive.

Graph 1. Number of tourists who have crossed the borders to visit Italy
classification according to the continent of origin 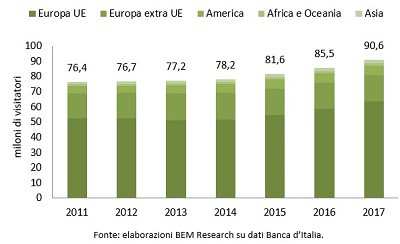 In detail for each country are still European countries to lead among those who visit Italy. However, rising sharply even tourists from the Americas, as well as growing, are also the ones from Asia. Slightly down are tourists coming from European countries outside the EU, Africa, and Oceania.

Looking at favorite destinations by foreigners is observed as the North of Italy is still top of the League. In 2017 the 68% of foreigners chose North, 21% 11% in the Centre and the South. The geographic area that showed greater dynamism in the last year is the South, whose visitors rose by 8% (+19% in the previous year), compared with +2% of the Centre-North.

Overall, the Lombardy, with 23.2 million of tourists, is the most visited region by foreigners according to statistics related to 2017 (-700,000 visitors compared to the previous year). Follows the Veneto (14.6 million) and Lazio (14.4 million), which crosses again the Friuli. In the queue of Molise, Basilicata and Calabria.

Chart 4. Spending by tourists who have crossed the borders to visit Italy
classification according to the continent of origin

The historical and cultural heritage of our country constitutes one of the flywheels of the attraction of international tourism. Assess how theItalian Museum offer is in step with the digital evolution is fundamental to trace possible areas for improvement.

To this end, also in the relationship e-tourism 2018 we repeated the analysis aimed at identifying those museums and archaeological areas that have thebest web performance m and are more predisposed to interface with visitors on a virtual basis.

Is the Egyptian Museum -historical Italian State site with the best online experience by bringing together the information about the web, social networks, specialized in tourism sites and applications for mobile devices (smartphones and Tablet). The Museum of Turin, sixth in the previous survey, managed to improve its position mainly due to better performance of the website and the introduction of the app.

In the second place, as in the previous year, lies the Valley of the temples. In third place on the last supper of Leonardo da Vinci, seventh last year.

Compared to 2017 all areas of the country have deteriorated. The North continues to be the area with the highest performance, followed not far from the Centre. Southern Italy has reduced the gap with the rest of Italy.

In an international comparison, the gap is still wide on Italian online, albeit in slightly reduced compared to last year. The Eiffel Tower far higher performance highlights of the best Italian historic-artistic site. The gap is large even in relation to the Tower of London, while the Prado Museum has benefits in line with the Egyptian Museum.

If the digital offering of our historical heritage you adapt to the standards of other European countries, the Italian tourism industry could have a major boost.

Better quality tourism, which would facilitate digital offer informed best on the immense opportunities that our country offers not only common on some popular attractions. In this respect, it should be noted that the average expenditure per tourist is contained, highlighting the fact that still prevails the so-called tourism hit-and-run.